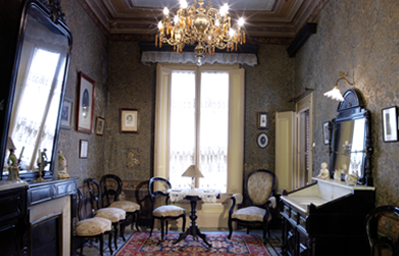 Casa Duran i Sanpere de Cervera is a good example of a Catalan bourgeois home from the late 19th century. A walk through the reception halls, with the large halls decorated to show in society, allow us to understand a lineage, that of the Durans, strongly rooted in the political and social life of the city. The most intimate spaces of the house, such as the private chapel, and the most functional spaces, such as the dining room, office and kitchen, speak of the family relationships and ways of life of that time and their transformations throughout of the years in which the house was inhabited.

Facebook Twitter LinkedIn WhatsApp Email
We use our own and third-party cookies to improve our services and technical reasons, to improve your browsing experience, to store your preferences and, optionally, to show you advertising related to your preferences by analyzing your browsing habits. We have included some configuration options that allow you to tell us exactly which cookies you prefer and which you don't. Press ACCEPT to consent to all cookies. Press CONFIGURATION to decide the options you prefer. To obtain more information about our cookies, access our Cookies Policy here: More information
Settings Accept